Oh, The Places We Go 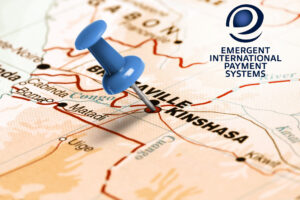 At first it happened in slow motion, and then accelerated rather quickly. International borders were closing rapidly and commerce ground to a halt. The departure board at JFK started to blink with one cancellation after another until there were barely any flights left. Marc Asselineau realized that returning to the Democratic Republic of Congo wasn’t going to be the hard part of his latest adventure. It was simply getting out of North America and then through Europe that would prove challenging.

Yet for the executive director of Emergent International Payment Systems, this was just another Tuesday. As he finally settled into his Economy-Plus seat, glad to be returning to the base of operations in Kolwezi, he began poring through the detailed notes that would guide his next few months in-country. Marc is one of those executives who is propelled by the belief that his efforts and those of the partners of EIPS are truly making a difference for customers and investors alike. Any obstacles laid before him are met with shrugged shoulders and a whimsical smirk. Sitting back in the comfort of his home hosting Zoom calls is just not his style. Instead, quarantining at the Hotel Moon Palace in Kolwezi, better positioned to carry out the company’s initiatives, felt like the only option for Marc.

At this writing, thanks to his efforts and the Fresnel partners, Emergent continues to expand its business in sub-Saharan Africa after last year’s launch of a prepaid debit card in the Democratic Republic of Congo. Even with the pandemic and government-instituted quarantine in major cities including Kolwezi, Lubumbashi, and the capital city of Kinshasa, the Kolwezi Visa has been the reliable payment method as both Western Union and Moneygram have had times of limited access or service interruptions.

In light of this, Marc and Emergent are well positioned to take advantage of the burgeoning financial services markets in sub-Saharan Africa where a young, digitally savvy segment is growing into financial maturity:

Although the worldwide Coronavirus pandemic continues to dictate global commerce, the government of the DRC is well versed at monitoring for viruses as a result of the unfortunate events of having other significant outbreaks in the past. And while following safe self-isolation procedures, Marc continues to drive Emergent operations in the Democratic Republic of Congo and Madagascar, while advancing plans to expand into the Republic of Congo and Cameroon. We’d like to tell Marc’s wife that he’ll be home soon, but he’s not leaving until he finishes taking Emergent International Payment Systems to the next level and beyond—something you just can’t do on a video call.